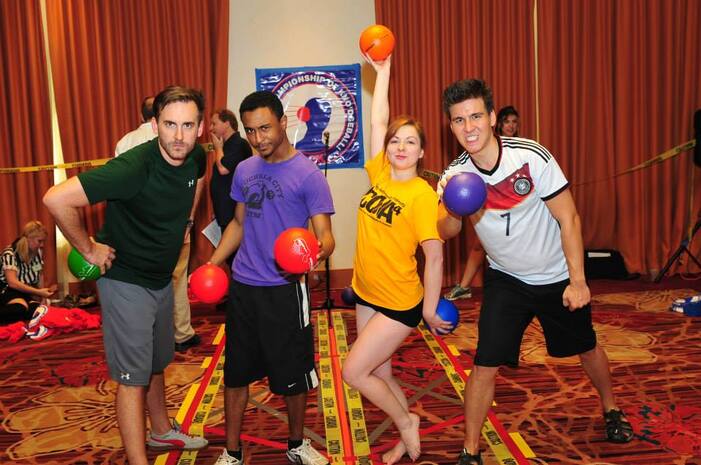 Why combine Trivia and Dodgeball?
The joy of play is that dodging and trivia require entirely different parts of the brain.
The challenge is unique, addictive, and supremely fun.
​
“The ultimate combination of trivia and athletics. I’m surprised it’s not illegal in some states.”
— Brad Rutter, Jeopardy’s all-time biggest money winner

The balls used in Kno’dgeball will be of a soft variety intended to diminish, but possibly
not eliminate, the chance of injury. Players may clothe themselves in any desired head,
eye, or body protection that they wish.
You must complete a waiver to participate
WAIVER
TO PARTICIPATE AS A PLAYER, OFFICIAL, OR SPECTATOR PLEASE COMPLETE THE WAIVER FORM BY FRI AUG 19
AND BRING A SIGNED COPY WITH YOU ON SUN AUG 21
​Created in 2012 by 14-time Jeopardy! contestant and TV writer Bob Harris (CSI:, Bones), Paul Bailey, founder of the Trivia Championships of North America (TCONA), and director Jason Perlman, whose work has amassed over 20 million YouTube views.  Joining the team in 2015, Bob Boden is an EMMY-nominated Media Professional in Production, Development and Consulting on Reality, Game Show, Non-Scripted entertainment projects.

To create a form suitable for live events, run-thrus were held at TCONA, in various L.A. parks, tweaking the number of players and balls, court size, sequence of questions and ball play, etc. Multiple versions work well — combining trivia and dodgeball is just fun— so our first priority became maximizing the number of players who could take part and enjoy a live event, with an eye on evolving into a form suitable for a broadcast or webcast series.
Scrimmage at the Game Show Boot Camp
Sunday August 21, 2022 in the Bora Bora Ballroom of the Hampton Inn Tropicana. The idea of a scrimmage is to introduce and practice game elements, to gather information on strategy and tactics, to have sections of live game action, and of course to be safe and have fun.
Anyone who wants to take part in Knodgeball™ as a player, official, or spectator will need to complete the participation waiver form and bring a signed copy.   Be sure to review the Rules.

GSBC Titans in the mix will become captains -- during the warm up they have the
opportunity to observe other campers and decide on players they want on their team.

0845-0900 Draft
There will be a rest break where the number of players divided by 4 will determine the
number of captains, beginning with Titans. Anyone wishing to play must arrive by 8:45
a.m. Playground style snaking draft - draft order among the captains will be first a random
draw, where Captain #1 selects a player, then #2, #3, etc to #n, who then selects twice
and the picks reverse until the #1 picks twice and all the other teams fill out with one
more selection. If there are not enough players to fill #n teams, then the last round
picks (the fourth player on various squads) will have the opportunity to play on more
than one team as substitutes.\

0900-1015 4x4 Drills
There will be a number of 4 vs 4 matches (2 minute clock for ball phase, with time out
during Knodge phase) such that every team plays at least once. Tie games will be ok
during the drills.

1015-1100 Runthrough
The officials will select 2 teams from the scrimmage for one sequence of play in a
potential show format. The officials may select entire teams, or specific players.
There will be a 4x4 phase of the game. The winner of that 4 vs 4 match then splits to 2
vs 2 (where that captain picks a companion)

After the 2x2, the winning side then competes 1 vs 1, with the winner of being declared
scrimmage MVP

If there is time remaining, there will be a gauntlet segment where a group of the 7
players from the top 2 teams try to disrupt the as the final challenge.