Contestant coordinators from the quiz show JEOPARDY! will be at the Game Show Boot Camp in Las Vegas in August, and will hold special contestant auditions on Sunday, August 21.

“We’re thrilled that JEOPARDY! staff will be on hand to audition campers for the show,” said Kelli Kristo, Executive Director of Project 150, the Game Show Boot Camp’s charity beneficiary. “The campers can pick up auditioning tips on Friday and Saturday, and then put them to immediate use on Sunday. It’s another wonderful feature of what is shaping up to be a very fun weekend.” 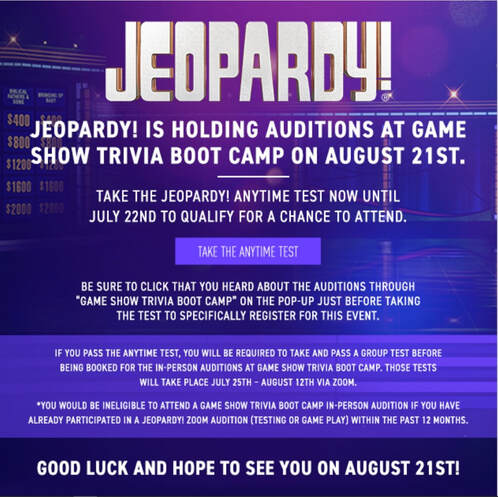 The Game Show Boot Camp is 48 hours of workshops and advanced training for anyone who wants to learn from the best how to get on their favorite show… and win. It takes place in Las Vegas on August 19-21, 2022.

Campers who want to audition for JEOPARDY! at the Game Show Boot Camp will be asked to take the show’s classic online Anytime Test (identifying themselves as campers) on or before July 22, 2022. Those who pass will be invited to join a group test before arriving at the boot camp in August. For more details about the auditions, see the Frequently Asked Questions or contact info@gameshowbootcamp.org.

JEOPARDY! begins its 39th season as ‘America’s Favorite Quiz Show’ this fall. The show holds the Guinness World Record for the most Emmy Awards won by a TV game show (with 42 total); on June 24th it won the 2022 Emmy for Outstanding Game Show. The show also received a 2011 Peabody Award for “encouraging, celebrating, and rewarding knowledge.”

Several of the Game Show Boot Camp’s staff experts -- or ‘Titans’ -- have appeared on JEOPARDY! to acclaim. Brad Rutter sits atop the show’s all-time earnings list with $4,938,436, and James Holzhauer holds the record for single-game winnings with $131,127. Amy Schneider completed a spectacular 40-game winning streak earlier this year, putting her second (behind Ken Jennings) in consecutive games won.

These Titans, along with other experts and surprise special guests, will be in Las Vegas for a full weekend of activities with boot campers, including seminars, games, and panel Q&As. A special highlight will be the Saturday night TITAN THROWDOWN, where campers will fight for the right to match wits with the experts in a game show-style contest.

The Game Show Boot Camp will be held just off the Las Vegas Strip at the Hampton Inn Tropicana, 4975 Dean Martin Drive.  The Titan Throwdown will take place nearby at The Space, 3460 Cavaretta Court in Las Vegas, on Saturday evening, August 20.

The Game Show Boot Camp is a fundraiser for a very good cause: Project 150 (project150.org), a Las Vegas non-profit providing free support and services to homeless, displaced and disadvantaged high school students.
For more information and to register for the Game Show Boot Camp, visit: GameShowBootCamp.org.

Tickets to attend the Titan Throwdown event only will be available soon through The Space at thespacelv.com.
See the Frequently Asked Questions for more info​
Contact:
NAME   Melissa Holzhauer
EMAIL   info@gameshowbootcamp.org
PHONE   (702) 530-5603‬
Support Us